The gym of the unforgettable Pirate

This is the Pirate mountain, our beloved and unforgettable Marco Pantani, who has chosen her as his personal "gym". It is here that the greatest climber in the history of cycling prepared his victories: 6 km from the town of Carpegna (750 m asl) with an average gradient of 10%; the last two are steep, around 12%, they are the ones that everyone calls the Cippo.

The village of Carpegna, with just over 1600 inhabitants and a vast landscape heritage, has been the protagonist of the Giro d'Italia for four times. The pinewood still whispers the breath of the greatest climbers: where the myth of the Pirate hovers, but also that of great champions of the past, like that of Eddy Merckx.

Once near the Cippo kiosk, the road stops to traffic and you can admire a monument in honor of the Pirate. The statue of the Cyclist, created by the sculptor Franco Tigli to honor his exploits, has become the destination of an incredible pilgrimage of cyclists who come every year to pay homage to the Pirate and his Mountain. It is said that Pantani, instead of making an inspection of the stages of the Giro or the Tour de France, as the other riders did, loved to ride just and only on the Carpegna: "Carpegna is enough for me" he always said.

These are the words of our unforgettable Pirate:

"When I go out in training alone, and it's most of the time, this is one of the laps I love. Until San Marino, nothing special. But from then on the beauty begins. Quiet streets, nervous path. With continuous ups and downs. And some severe surges. The first is the one that, after Montemaggio, goes up to San Leo. And from there to the Madonna di Pugliano and to the next pass. In about ten kilometers you go up almost to 1000 meters. But this is not the most challenging climb of the day. It is the next. The one that climbs Mount Carpegna from Caturchio. At the beginning it is not very steep. It is between 6 and 8%. The hardest stretch comes past the village of Carpegna. There are six, seven kilometers with an average gradient of 10%. The last two, below the summit at 1360 meters above sea level, we call them the Cippo and they are the steepest, at 12%. In that stretch I use the 39 x 19/21. Of course, this is not a climb like those in the Alps that made me famous. But to train well Carpegna is enough for me. "

For sportsmen of all levels and ages

Santarcangelo, where you can feel Romagna

Monte Barbotto, the hardest climb of the Nove Colli 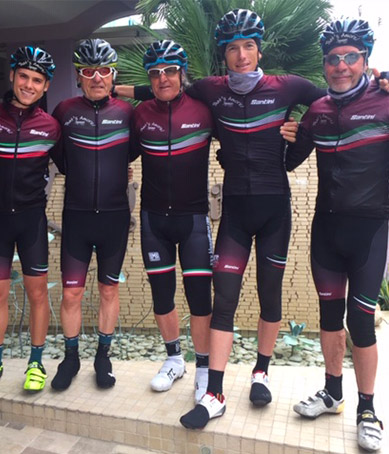 LET YOURSELF BE CAPTIVATED BY

Don't make these mistakes when
booking your cycling holidays in Italy!

Download our ebook with the TOP 7 mistakes cyclists make when they plan and book a cycling holidays in our Country.
At the end of the ebook, you will find what to do instead, with our TOP Tips!
Download now